CT scans have been an important diagnostic tool since their development in the 1970’s. Current scanners, like our 160-slice Toshiba, can create very detailed images of internal body structures in just a few seconds. These images can be reconstructed in various planes for our physicians to make a diagnosis of your condition. 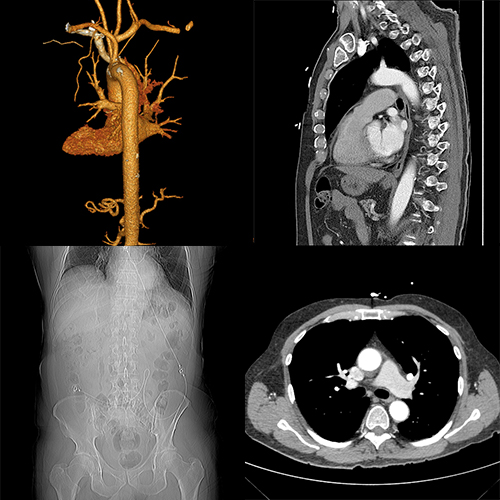 A CT scan can be performed on any part of the body, but the most common are of the head, chest, and abdominal areas. A scan may include the use of a contrast media, or “dye”, which can give additional diagnostic information. This contrast may be injected or swallowed depending on the exact test you are having. Most patients have no problems with the contrast and resume normal activity immediately after the exam.

CT scanners use x-rays to create the images, and many people are concerned about radiation dose. This has increased due to several national media stories. The radiation used during a CT scan is usually a small amount, and the diagnostic value of the study is usually much greater than the risk of radiation exposure. If not, we recommend another imaging study for your condition.

Background radiation occurs naturally everywhere, but Colorado residents are exposed to greater amounts due to altitude and geology. Despite this increased radiation Colorado residents have been found to have no greater cancer risk than other state populations. A CT scan commonly will use as much radiation as you get just by living in Colorado for several months. The exact amount varies by the study being performed and your body structure. Our CT scanner customizes the amount of radiation needed to the exact measurements of the patient so you know you are getting the least amount needed.

© 2022 The Imaging Center. All Rights Reserved